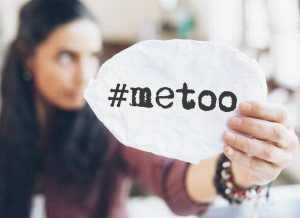 “Me Too” is the twitter hashtag used by Alyssa Milano in an open letter she posted following the sexual harassment allegations against the Hollywood mogul Harvey Weinstein in mid-October 2017.  As everyone has learned, Harvey Weinstein, once revered as the apotheosis of Hollywood power, has fallen in every possible way since – dozens of women have come forward with sexual abuse allegations, he lost his job at the business he built with his brother, Bob, at the Weinstein Company,  and he now faces potential personal legal troubles in numerous cities around the world.  As a result of Weinstein’s egregious misconduct and potential lawsuits and exposure, the Weinstein Company has had troubles of its own, is on the market and looking for a buyer.

Types of Remedies: Criminal and Civil

#MeToo has since come to symbolize widespread sexual abuse, assault, harassment, and discrimination of women in the workplace. And it has been a powerful tool in shedding light on workplace violence.  The legal remedies available to #MeToo Survivors generally fall into two categories: criminal and civil.  Criminal remedies are those available through a local law enforcement agency.  Once a survivor files a police report with local law enforcement, the agency takes over. Depending on the facts and timing, they may investigate and make a recommendation as to whether to pursue criminal action against the perpetrator.

Our firm handles matters involving the second category of legal remedies available to #MeToo survivors, the civil remedies. These are non-criminal remedies in superior court and generally consist of money damages and possibly injunctive or declaratory relief.  Injunctive relief is an order from the Court for someone to do or not do something while declaratory relief is an official statement from the Court that something is or is not in violation of the law.

Timing is Everything: Claims Must be Filed within Statutory Periods

As with all civil matters, timing is everything, but is even more important with sexual harassment in the workplace. The law provides what are termed “statutes of limitations” that are time frames within which to bring legal action lest forever be barred from filing a lawsuit.  For most types of claims – absent any “creative lawyering” that bases claims on other theories of liability – these time frames are relatively short, as little as 6 months from the date of incident or harassment.  These time periods depend on many factors, including the type of employer (that is, public versus private), age of the survivor, potential disability, date of discovery to the wrongful conduct, as well as legal theory of liability.

Some time frames can be extended if the survivor is a minor, or perhaps has repressed memories, or only learns of the abuse after the incident occurred, but each case is different.  Depending on the type of abuse, and jurisdiction of the case, a claim may also have to be reported to an appropriate government agency such as the Department of Fair Employment and Housing (DFEH) in California or the federal Equal Employment Opportunity Commission (EEOC) before the case can be filed in Superior Court.  For example, a claim for sexual harassment of an adult-aged employee against a private employer must be filed with the California Department of Fair Employment and Housing (DFEH) within a year of the incident pursuant to California Government Code section 12960. Failure to do so will prohibit subsequent legal action in superior court for claims that fall under the Fair Employment and Housing Act which encompasses employment discrimination and harassment. The same conduct against a private individual as opposed to an employer who may have ratified or legitimized such conduct might be two years under California Code of Civil Procedure section 335.1.

To Arbitrate or Not to Arbitrate: You May Not Have a Choice

Arbitration is a method to settle a dispute outside of court. It utilizes an “arbitrator” who is usually an attorney or retired judge to hear evidence and render a decision based on that evidence. That decision may be binding or non-binding.  With a binding decision, there is no right to appeal.  A survivor may also not have any choice whether or not to arbitrate. We prefer a jury trial where our clients can put on evidence in front of their peers to let the jury decide both liability and the amount of damages, but many employment agreements contain an arbitration provision that requires parties to arbitrate their claims.  This, in our view, disadvantages employees and we fight tooth and nail to dispute arbitration provisions.  It is always a good idea to always obtain a copy of the employment agreement and review it for the existence of an arbitration provision. especially if the employment agreement includes an arbitration provision.  This is a very esoteric and constantly changing area of law, however, so it is important for a survivor to speak with a lawyer well-versed in this area.

Report to Employer: The Importance of the Evidentiary Record

Liability against employers and individuals depends on evidence.  With regard to employers, it is important and necessary to establish that the employer knew about the misconduct and failed to protect the employee. If the employer knew nothing about the abuse, they cannot be held liable.  Knowledge, however, does not have to be “actual” knowledge. It can also be “constructive.” The difference is that while actual knowledge is direct information made to the employer about the conduct, constructive knowledge is indirect, often circumstantial, but enough in totality to hold the employer responsible for essentially ratifying the abuser’s conduct.

Evidence against both employers and individuals, however, especially for sexual abuse or harassment, is often only testimonial.  Testimony, in and of itself, may be sufficient, but of course it is always helpful and a case is significantly bolstered with further corroborating evidence such as witnesses, video or audio evidence, documentation, social media, text messages, and the like.

A competent civil attorney should be able to obtain this evidence if it exists through proper legal procedures and channels.

Civil cases are primarily concerned with compensating survivors for all harm caused by the abuse and harassment. Harm may be physical and medical, supported by medical records or other documentation, but it is also highly emotional and psychological, and can be quantified and measured for the jury. That is what we attempt to do in presenting our cases and evidence. We paint a picture of the extent, severity, and duration of abuse, what was or was not done to prevent it from occurring, and the harm ultimately caused by way of long-lasting emotional trauma.  In certain cases, an employer or individual may be punished in a civil action with punitive damages. Punitive damages are damages assessed against a wrongdoer for callous and intentional conduct and are based on the wrongdoer’s financial condition. Survivors may be compensated under the law for all harm caused: physical, medical, psychological, and financial.

This area of law is highly complex and requires a thorough analysis of the facts. Involved in a #MeToo case are interrelationships between state and federal courts and systems, administrative agencies, jurisdictions, and statutes. There are considerations of statute of limitations, court versus arbitration, jury versus non-jury, and optimal theories of liability. There are potentially press or media considerations. Evidence to be factored into the analysis include witness statements, documentary evidence, video or audio evidence, employer policies and procedures, social media, text and email messages, and the like.  And just because evidence exists does not always mean that is legally admissible.  The possible exclusion of critical evidence also needs to be evaluated.  Then there are the types of remedies desired and the most optimal way to obtain those remedies. Is it the public revelation of wrongdoing? Vindication? To recover money damages to compensate the survivor for everything they’ve been through? To punish the employer for exposing the survivor to abuse in the first place? Or to punish them for failing to do anything about the conduct once they learned about it?

It is important to us when we meet with potential survivors for them to trust and feel confident with us, especially in light of everything they’ve been through.  Our goal is to offer understanding and to truly understand our clients and their feelings, to determine exactly what happened and when, learn all facts, evaluate all possible considerations, vet the desired remedies and outcomes, and propose a mutually agreeable approach in conjunction with our client’s expectations.  We can only represent our clients when we truly understand them and how all they have been through has affected them.  And only if there is mutual respect and understanding between attorney and client.  We also recommend and refer survivors to appropriate counseling or treatment providers when needed or requested.

We always strongly recommend that a survivor contact law enforcement and have a conversation with law enforcement officers about the circumstances of their abuse if they believe that criminal activity has occurred. At the very least, this initial step creates a documentary record of abuse.  Survivors should also contact a civil lawyer regarding their rights immediately, before the law prohibits them from taking further legal action. Contact us at (760) 431-5290 if you’d like to meet with one of our attorneys regarding a #MeToo matter.

Our firm is dedicated to providing aggressive representation from the beginning of your case. We anticipate and plan as though every case will proceed to trial. In that respect,